It’s time to unveil my garment for The Hollywood Sew-along – The Notebook……….
a Playsuit!!! Well a playsuit of sorts anyway. 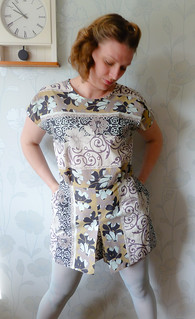 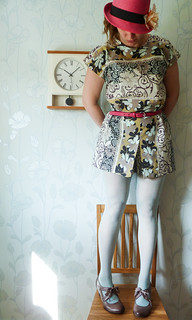 Let’s see, where to start, you can read about my inspiration & the other information about the sew-along here. I made the pattern myself after testing some other ideas of pattern hacks, that didn’t turn out at all how I wanted.
I knew I wanted culottes with side pockets, which meant I had to have the opening in either the front or back. After looking at some vintage patterns online, I decided I wanted a plain front & to make things a bit easier I put a zip in the back. I am not happy with the zip, but seeing as my sewing machine broke, I had to borrow my mum’s & I wasn’t going to put in a hidden zip without the foot for that. I might redo it when I get my machine back, so it doesn’t pull like it’s doing. 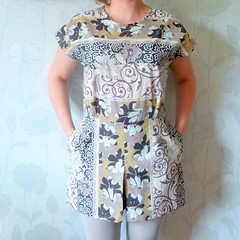 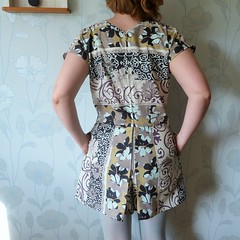 I don’t know what happened with the pattern, I made a muslin & it needed a few alterations, but I must have done something wrong when I transferred them to the actual fabric (it’s a cotton voile & has been in my stash since 2008). The bum area seems to have lost some ease (hence the pulling around the zip), the darts seem extra fluffy & didn’t line up. The bodice originally had 2 folds & looked like the Anna Dress, but as I screwed up somewhere, I took them out & just gathered to excess fabric. The culottes were longer but it was just too much, so I took off about 10 cm, now they are close to a bit too short for me, oh well, c’est la vie! 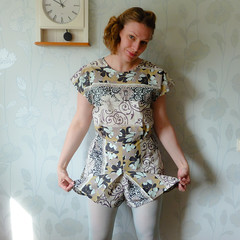 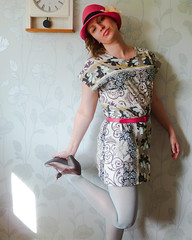 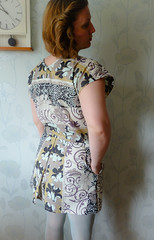 In the end, I’m quite happy with it, I think I’ll make another after I’ve tweaked the pattern again. I like the idea of it, of what it could become!
I had fun with the styling, I tried to do victory rolls, but my hair is as always very stubborn. Anyway I hope you enjoy the silly poses in some of the photos :) Don’t forget to go check out what the other sew-alongers have made!
Freya from The Dressmaking Diaries
Charlie from This blog is not for you (Also making a playsuit it seems)
Hannah from Made with hugs & kisses
Courtney from Makesphere
Amy from Sews N Bows
Nina from Inchworming 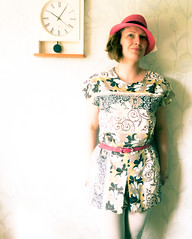 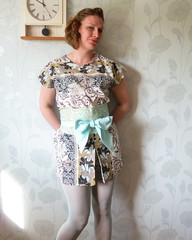 This entry was posted in Sew-along, Sewing, Stash Busting. Bookmark the permalink.